Top 5 countries with the highest motorbike use in Asia.

According to the latest official D&G comprehensive survey carried out in Thailand, a poor person is now defined by the following two standards.

The study also indicates that these poor people are definitely in the minority. Now, I don’t know how accurate this poll was, but my observations seem to indicate that 99% of the population have both a motorcycle and a phone. However, a problem has recently emerged insomuch as many Thais attempt to use both at the same time.

Ironically, the only good aspect to come out of the Covid-19 mess is that the traffic fatalities are way down in the Land of Smiles. Keep in mind, that Thailand competes for being in the #1 pole position in the World for deaths on the road. Motorcycles lead the pack in the dying category. 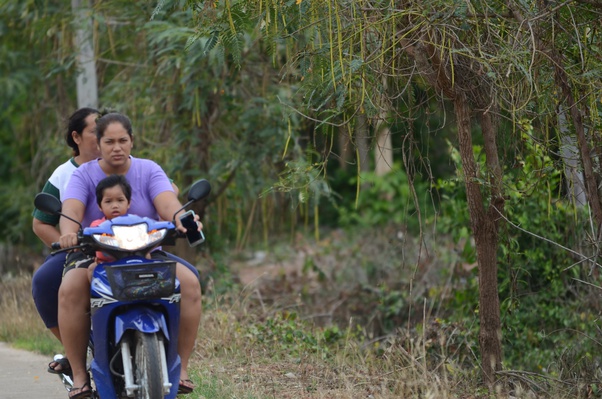 One major reason motorcycles are popular in Thailand simply boils down to money. New ones start out about B50,000 or $1,500 and I’ve seen used motorcycles go for B20,000 or $615, sometimes a lot less. They are a heck of a lot cheaper than buying a car or a truck.

Motorcycles are also considerably easier to park than a car. In all of the cities that I have visited in Thailand, there is always a shortage of parking spaces. Most Thais tend to park their car (more or less) in designated areas, but not so much with the two-wheel vehicles. The sidewalk seems to be the most popular parking site for motorcyclists. 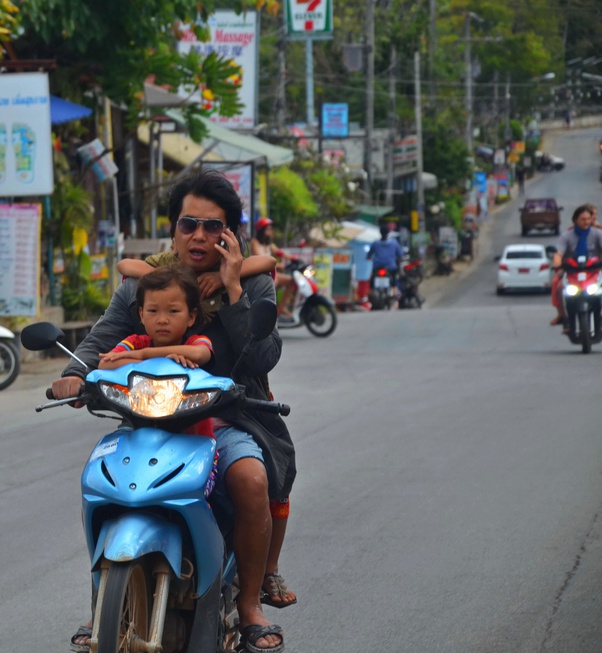 The motorcycle taxi guys pictured below are often seen in my neck of the woods transporting many of the poorer Thais from home to market and back again. I have also used their services to transport materials from the hardware shop to our place. They charge me B50 or a buck and a half for the trip. 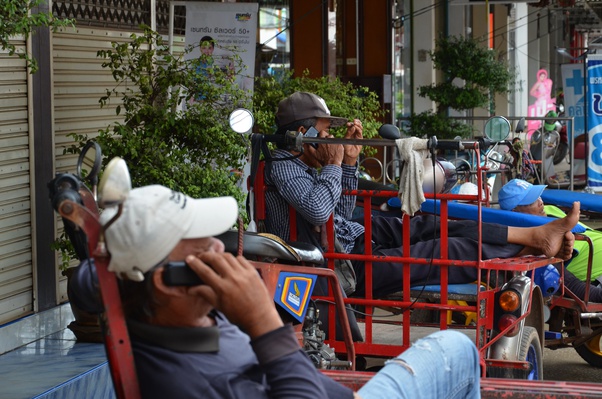 Young people also enjoy the freedom a motorcycle provides. I probably yell at one or two riders a week as they go zipping by D&G. Sadly, they are often watching their phone instead of the road… 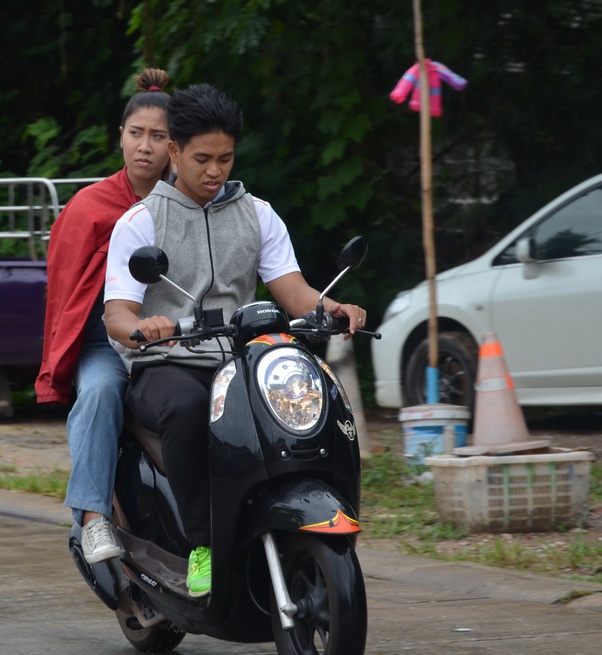 Motorcycles the reliable mode of transporation in Bangkok to commute around from places to places. This reliable transportation can guarantee your travel under pressure within the restricted time crisis. It is also easy to find a parking spot in any parking lot area. A motorcycle is manufactured in two distinctive mechanical specification as follows: 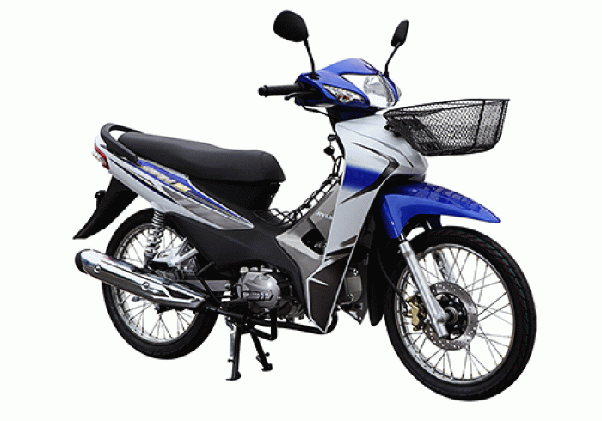 [Note: This mechanical design is a scooter with an exception of a high caliber thrusting engine that is suitable on the road. The price range is usually between 20,000 THB – 50,000 THB which is affordable for low income individuals on finance. Thai people usually name this motorcycle specification as “รถมอเตอร์ไซค์หญิง – A girly motorcycle from the direct Thai translation.] 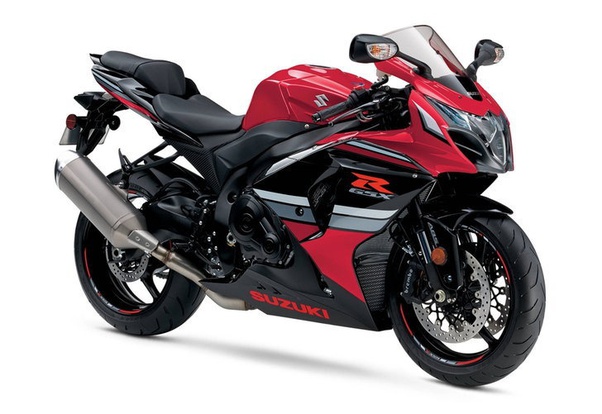 [Note: This mechanical design is a motor bike. I assure people are familiar with this specification in which my elaboration is not necessary. The price range is very sky rocketed for a decent engine motor to embrace the manhood inside you. The price tag is definitely up there for those high-end users from the wealthy background. Thai people usually name this motorcycle specification as “รถมอเตอร์ไซค์ชาย – A manly motorcycle from the direct Thai translation.]

We notice other vehicles are stuck in the traffic, while the scooter is able to maneuver its way toward the intersection light. They can also hop onto the sidewalk to get to the intended destination when the conjestion takes too long. I assure it is illegal in other developed countries, but Thailand has its exceptional traffic rule. This unoffical law is DON’T ASK, DON’T TELL!]

The delivery service also uses the scooter as well, because time is of the essence for the customer. I can give an example for the intermediary food delivery in Thailand; GRAB,LINEMAN, FOOD PANDA, etc. The food delivery service must be prompt on their feet before the food gets cold to dissatisfy the consumer at the doorstep. These entities will do whatever is necessary to deliver the food on time at no matter the traffic condition.

[Note: There are definitely more food delivery services in Thailand, however I tend to rely on these three intermediary entities so far. They tend to complete their delivery in between 15-30 minutes after the order is ready from a hot frying pan. The plate is still fresh and hot after their delivery rush from any traffic condition.]

On the downside, I also agree withGeorge Bowmanon his other main postthat Thailand has one of the highest death percentages which is caused by road accident. There are many“DON’T ASK, DON’T TELL”unofficial traffic rules in this country that lead to unpredicated deaths from the improvident habit among Thais.

One of the thoughtless actions is talking on the phone while riding on a motorcycle at a traffic speed. Most motorcycle riders are a laborer, so they are always on the clock in their job performance to deliver their task. These riders either receive a new instruction, or they are being asked for an update of some sort.

I just wish these riders have common sense to at least stop on the side of the road until they are done on the phone. Motorcycles can favor your convenient with the time consuming matter. It can also curse you into a traffic accident at the same time from a thoughtless action in Thailand.

Islam, authoritarianism, and underdevelopment: a global and historical comparison